Do you know that your smartphone blue light, is affecting your brain and body? In this new age and technology trend, the addiction of smartphone is on the rise. In fact majority of smartphone users operate their phones deep into the night, there’s always a desire to check your phone one last time before going to bed when it’s very dark.
Studies over the years have shown that, this could lead to a serious health problem. We know how difficult it will be to stop but staring at your smartphone at night is not a good idea, especially when you do not understand the effects it’s already causing you.

Research has shown that your smartphone emits a bright blue light that enables you to see whatever is displaying on your mobile phone even if your display is set to the maximum. This bright blue light is powerful enough to affect our brain at night because it has been discovered that this blue light acts like the brightness of the sun. It causes the brain to stop the production of melatonin ( this is a hormone that is found in the body and it instructs our body when to sleep). This singular act can cause certain disturbance to our body system,  the lack of this hormone interrupts the biological clock of our entire system. It can lead to insomnia, which is the continuous lack of sleep and can also result to an unnatural sleeping cycle. Hence, lead to serious health issues.

We decided to give a full breakdown of the effects of this blue light on the brain and body.

Research has shown that the impact of blue light is more disturbing on children and teens compared to adults because they are still more vulnerable to effects of lights. It has been discovered that circadian rhythm naturally shifts during adolescence, this results into teenagers feeling more awake at night compared to adults.

There are ways to curb this effects of blue light even before it starts harming us, the makers of our smart phones and other smart gadgets have also installed certain features that counters the effects of this blue light.

If your smartphone does not posses these feature you can search for other available applications designed help solve this blue light effect. Examples of such softwares is Twilight, Twilight is available for only Android, iPhone users can make use of Night Shift. other applications that can solve smartphones blue light can be found from the below image. 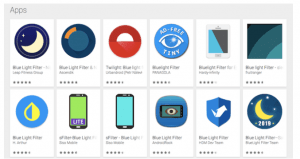 How to get UBA Africard & Activate it Instantly [2021 Ultimate Guide]