All Of Us Are Dead, Should You Watch It? the Netflix series that’s quickly replacing Squid Game. 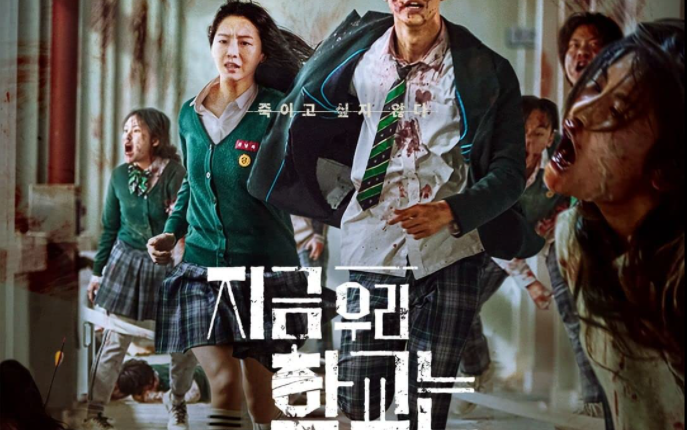 A high school is transformed into the epicenter of a zombie virus pandemic. Students who have been trapped must either fight their way out or risk becoming one of the rabid infected.

The Koreans are masters of the art of telling a compelling story. With All Of Us Are Dead, a zombie thriller (again on Netflix) that is by turns scary, funny, sad, hopeful, horrific, and a whole lot of fun follows just after Squid Game, a tremendously addicting Netflix series that has become extremely popular recently.

All of Us Are Dead, like every other zombie film or television show that has come before it, follows a few established cliches. Various scenarios include people fleeing from zombies, morphing into zombies, waging war against zombies, being attacked by zombies, crying over those who have been assaulted by zombies, and crying even more when they are forced to “murder” that person who has now transformed into a zombie.

This ‘same-ness’ is not a negative for those of us who are zombie enthusiasts. In fact, we are delighted by it.

About the Series “ALL OF US ARE DEAD”

A group of high school kids are going about their business when a girl is bitten by a rat that has been infected with the virus. After she transforms into a zombie and bites someone, you can probably guess what happens next.

We never realized how scary school could be.

There are plenty of hormones and crush confessions in amongst all of the zombie-killing in this film, which stars a very gorgeous young ensemble cast: “Get away from here! By the way, I really like you. Run!” Teenagers, on the other hand, have absolutely no sense of time.

In addition, when I say “Run,” I really mean it. This group of zombies, in contrast to the trudging undead of George A. Romero’s Night of the Living Dead film series, runs extremely quickly, as has been the case with the recent crop of zombie-related stories.

Despite the fact that the series oscillates between the ridiculous and the horrible, it manages to touch on some contemporary topics such as bullying, refugees, teen pregnancy, and the class structure.

In addition, it is not a spoiler to say that a series featuring zombies, multiple people, and the tagline All Of Us Are Dead will have a lot of death. A LOT, in fact. Make sure you’re prepared. Bring Kleenex with you. There is no one who is safe.

A seemingly innocuous bite occurs within Lee Byeong-research chan’s lab; shortly after, a rapidly expanding outbreak engulfs the entire school, resulting in the death of every student.

Should you watch ALL OF US ARE DEAD

Netflix has not confirmed whether or not there will be a second season, but with All Of Us Are Dead presently ranked number one in over 25 countries (including Australia) since its premiere last Friday, things are looking positive for the show.

On Netflix, you can now watch the whole first season of All of Us Are Dead (season 1, episode 1).